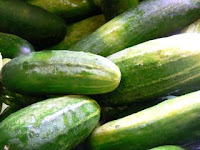 There is something irresistible about the cool crunch of cucumber.Thus it is not surprising that cucumbers can be found in most major international cuisines. They are related to other members of the Gourd family, including melons and squash.Because they are comprised of about 95% water, they are quite refreshing and filling, even though they contain very little calories and virtually no fat. However, they are also a very good source of vitamin C, Vitamin K, and potassium.They also contain significant amounts of magnesium.The skin adds added fiber.

There are two general types of cucumbers found in the U.S.They are referred to as “slicing” and “pickling” cucumbers.Slicing cucumbers are darker green, more uniform in color, and tend to have a thicker skin.They are most often used raw, but sometimes also in cooked preparations (see below).Pickling cucumbers tend to be smaller and more uniform in size and, when picked at the ideal immature stage, have a number of knobby “warts” on their surface.Pickling cucumbers are great for pickling, but their extra crunchy texture makes them a great addition to salads and other raw preparations.

Cucumbers are best known as a vegetable to be eaten raw as in a crudité platter, in salads, in cold soup, in sandwiches, as a base for small hors d’oeuvres, as a filling for sushi rolls, or as pickles.Because they are so neutral and absorb so much flavor they are great marinated with any kind of vinegar.They also offer a unique cooling effect when served with spicy foods, especially when mixed with yogurt or sour cream, as in Indian raita or Greek tzatziki.

Some interesting salad combinations I have seen lately include

Because of their high water content, raw cucumbers often release a lot of liquid that dilutes other ingredients.As a result, many recipes require salting and draining cucumber to remove some of the water and avoid over-diluting the recipe. Seeding cucumbers can help reduce water content as well.

While a less familiar preparation, cucumbers can also be cooked.Check out this interesting article about cooking cucumbers on e-cookbooks.As an example, cucumbers sautéed for about 3 minutes in butter and a little water are delicious.See recipes below for an example of grilled cucumbers.

To store cucumbers, place, unwashed, in a plastic bag in the crisper drawer of the refrigerator.For best results, use within a week.

Apparently, cucumbers do not freeze well unless they are brined first.Here are a few recipes for freezing cucumbers–Thrifty Fun and allrecipes.

Refrigerator pickles are a quick, easy way to use up a glut of cucumbers.Because they are not heat “canned” they will only last for up to 3 weeks in the refrigerator.

1. Slice cucumbers into 1/4″ rounds or spears.Pack into a clean wide-mouth quart jar.

2. In a medium saucepan, heat vinegar, sugar, salt, garlic, mustard seed and celery seed until it boils.Boil for one minute.Remove from heat.Stir in minced dill.

3. Pour hot liquid over cucumbers.Let cool one hour.Place lid on jar and refrigerate at least 12 hours.Pickles will keep, refrigerated, for 3 weeks.

Below is a wonderfully fast and simple, yet highly flavorful way to use cucumbers at your next meal.The recipe originally came from my good friend Andrea, who said she adapted it from a recipe in The Ultimate Cooking with 4 Ingredient Cookbook by Jean Coates.

Combine vinegar, sugar, dill weed, and black pepper.Pour over cucumbers, onion and cherry tomatoes and toss gently to mix.Refrigerate at least one hour.Stir again just prior to serving.

Green Gazpacho is a healthful, refreshing, and delicious way to enjoy raw cucumbers.This recipe was adapted from Eating Well, July/Aug 1993.

1. Reserve 1/2 cup cucumber and a little parsley and cilantro for garnish.

2. Place all remaining ingredients in a large blender and blend until completely smooth.Adjust salt level if necessary.Place in shallow soup bowls.Garnish with reserved cucumber and herbs.

My favorite way to enjoy cucumbers is with Asian flavors.Below are a few Asian inspired recipes.The first recipe uses raw cucumber, is very kid friendly, and is a cooling meal for any hot summer day.The second recipe illustrates how cucumbers can be delicious even cooked on the grill!!

2. Heat a large pot of water on high heat until boiling.Add pasta and cook 8 minutes or until tender.Drain and rinse with cold water to completely cool pasta down.Drain thoroughly, shaking to remove excess water.

3 .Place pasta in a large bowl and toss with green onion, red pepper, chicken (if using) and cooled peanut sauce.Recipe can be made ahead up to this point.Place noodles in refrigerator until ready to serve.

4. Upon serving, toss noodle mixture with cucumber.Sprinkle with sesame seeds and serve.

Yellow or white miso paste can be found in Whole Foods markets or health food stores.It lasts about a year in the fridge, which is good thing because you will want to make this recipe again and again.

2. On a double sheet of ungreased foil, place salmon fillet.Top with 3 tablespoons miso mixture and brush to coat evenly, trying to keep miso mixture from spilling onto foil (where it will burn).

3. Place salmon on foil onto grill.If you have a gas grill, place salmon in center and set heat level to medium high in the back, medium low in the middle, and medium high in the front (indirect heat).Close lid and cook for 10 minutes.Check temperature and continue to cook as needed.Fish should be cooked to about 140 degrees and then allowed to sit for a few minutes as the temperature will increase to the ideal 145 degrees.Total cooking time is about 15-20 minutes depending upon thickness of fillet and intensity of heat on the grill.

Once fish is done, take a flat-sided baking sheet, slip under foil, and remove fish from grill.Cover fish with another piece of foil and allow to sit while you cook the cucumbers.

4. Spray cucumber halves with grill cooking spray or brush with oil.Turn grill burners all to medium.Place cucumbers, seed side down, on grill.Cover grill and cook for 3 minutes.Turn cucumbers and brush with reserved miso sauce.Cover grill again and cook for an additional 3 minutes.Turn cucumber halves one more time just to brush second side with miso mixture.Cook for one minute, then remove to a plate.

5. Slide a very thin spatula under fish just above the skin to release meat from skin.Transfer to a platter.Surround with grilled cucumber halves and serve.

Because cucumber is naturally cool and refreshing, it makes great drinks.Below is an infused cucumber and basil agua fresca that has just a touch of sweetness to bring out the fruity note of the cucumber.However, if you prefer, you can leave the sweetener out.

Place cucumbers and basil in a blender and blend until completely smooth.Add a few tablespoons of water, if needed, to facilitate blending.Over a pitcher or large bowl, pour cucumber mixture through a fine sieve, using a wooden spoon to push and move around solids in order to extract liquid.Discard solids.To cucumber basil mixture, add 2 quarts of water.If desired, add agave syrup and stir.Chill before serving.