What an exciting week at the farm….the cherry tomatoes are ready for tasting and we have eggplant!!! Times have been tough for eggplant at Holcomb Farm in recent years. How exciting to witness such a great comeback. Great job farm team!!!! 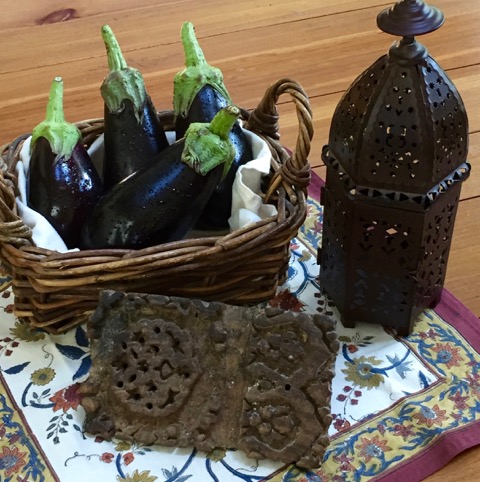 Eggplant offers many healthful nutrients and benefits. Its’ antioxidant properties promote cardiovascular health and may even help prevent cancer. Eggplants are high in fiber, copper and Vitamin B1. They also contain decent amounts of vitamins K and B6, as well as Folate, potassium, and manganese. They are naturally low in cholesterol and fat, but do contain significant amounts of sodium, which should be kept in mind when adding additional salt.

Eggplant needs to be cooked fully in order to achieve its signature creamy texture and rich flavor.  Undercooked eggplant is rubbery and unappetizing.  Eggplant can be steamed, roasted, baked, sautéed, and grilled.  However, I have found that on the grill or in a sauté pan it can tend to dry out before it gets sufficiently soft (such a troublemaker!).  This is often avoided by a) adding water or another liquid to the pan, b) by lowering the temperature, c) by covering it during and after cooking to allow steam to re-moisturize it, and/or d) by “sweating it”.

I am always looking for new and interesting ways to use eggplant. Here are some ideas that I have come across recently in cooking magazines and the Internet:

A Note on Fairy Tale Eggplant

This week we get to try a new pick-your-own vegetable—Fairy Tale Eggplants. I don’t know who named these little gems, but fairy tale eggplants are truly adorable with their small size and pretty lavender hue. To try them is to fall in love. They are just so incredibly creamy and sweet. I did a little investigation and found out that these pretty purple beauties are less seedy and bitter than other varieties of eggplant. The skin tends to be very tender and the flesh cooks up sweet and creamy. Smaller eggplants (about 2”) appear to be the favorite, but they are still great anywhere from 1-4 inches in length. I have heard that these eggplants are amazing grilled whole but I haven’t tried it yet. If you try it, please let us know how it goes.

I love the combination of Mediterranean spices and eggplant. I developed this delicious chip recipe as a healthy snack option.  My family adores it.

I decided to crisp these chips in the oven rather than the dehydrator because most people don’t have a dehydrator. If you do own one and would like to use it instead, follow the manufacturer’s directions for dehydrating eggplant.

This recipe is an adaptation from a quick recipe blurb by Kay Chung that I saw in Food and Wine magazine last July. It combines succulent eggplant with tender potatoes in a warm caramelized salad that is highly addictive. Beware; this might become your all-time favorite recipe…

Warm Potato and Eggplant Salad with Mustard and Dill    Serves 4