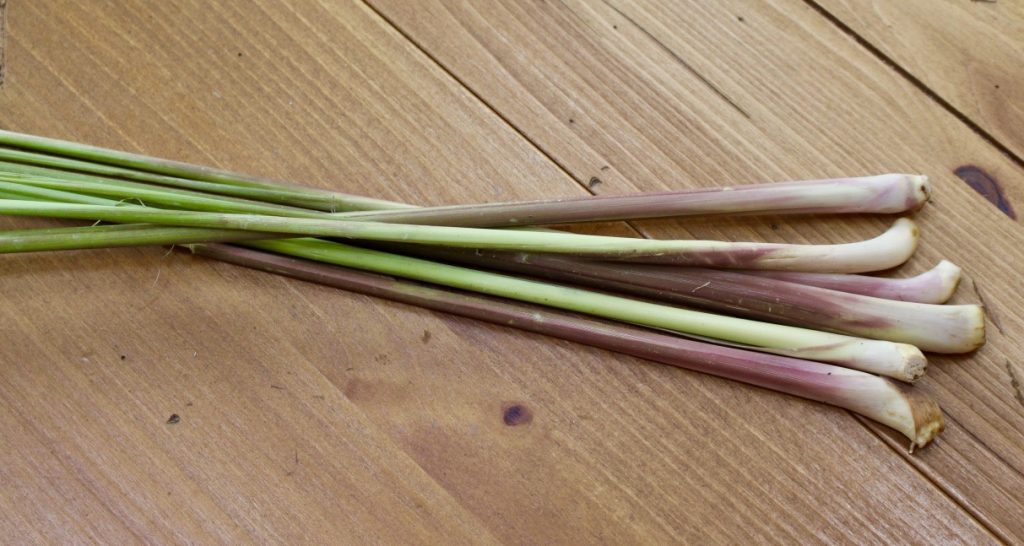 Lemongrass is, not surprisingly, an exotic lemony flavored stalky grass often used in Southeast Asian cooking, particularly in Thai dishes.  Lemongrass leaves and the oils made from it are also used medicinally in teas, essential oils, etc.  WebMD reports of lemongrass:

“Lemongrass might help prevent the growth of some bacteria and yeast. Lemongrass also contains substances that are thought to relieve pain and swelling, reduce fever, improve levels of sugar and cholesterol in the blood, stimulate the uterus and menstrual flow, and have antioxidant properties” (click here for source).  Nutritionally, lemongrass also offers vitamins A and C, much of the B complex, as well as folate.  It also contains many essential minerals.

One of my favorite ways to use lemongrass is in tea.  I cut about 3-4 inches off the bulb end 0f 3-4 lemongrass stalks, crush the stalks and bulb with the flat end of a knife (or meat pounder) and place them in a pan with a 3-4 cups of water.  I heat just under boiling (in order to preserve the properties of the precious oil), and then let it steep for about an hour.  The tea can then be consumed cold or reheated (just don’t boil it).

lemongrass is also used in many Southeast Asian dishes such as soups, sauces, meat dishes etc…  The stalk is constructed in many woody layers, with a very aromatic and flavorful soft inner core layer.  Typically, only the soft inner part of the stalk is used for cooking, mainly because the outer stalk is tough and hard to eat.  The lemongrass we will be receiving from the farm is quite narrow so the soft inner stalk will be very small. Rather than try to free the little bit of tender stalk in the middle, I suggest first removing at least the first outer layer of stalk.  Then cut about 3″ off the bulb end and either very finely mince it or puree it in a food processor with some garlic and ginger to make a paste for curries.  You can also use large pieces of the stalk in soups.  Using the side of a knife or meat pounder, crush the stalk to break it open.  This releases all the flavor and oils.  Place the crushed stalk in the soup and then discard it after the dish has cooked.

I love to make my own homemade vegetable broth from bits and ends of CSA produce I would otherwise throw away.  I will include my method for making this broth below.  What I wish to say here is that I sometimes add crushed lemongrass and ginger to the veggie broth pot.  This makes a ready Asian flavored broth that I can freeze and later use for any kind of Asian meal, like a quick Asian chicken soup which I love to have when I come down with a cold.

Beyond using it in broth, my favorite way to use lemongrass in meals is in traditional Thai Curry Coconut Soup.  Here is a recipe that follows the basic technique I use (click here).  Keep in mind that many vegetables can be added to this soup.  Some particularly good ones are zucchini/squash, winter squash (including cooked spaghetti squash strands), sweet peppers, cauliflower, leeks, broccoli, turnips, radishes, and any kind of green, etc…

Here are some other Internet recipes for using lemongrass:

I post this technique every year, typically in the fall when the cooler nights invite warming soups and stews.  This technique of using your CSA scraps to make vegetable or meat broth is a brilliant way to save money by using almost every scrap of your CSA share.  It also allows you to avoid buying processed broth, which often contains questionable added ingredients such as sugar and MSG.  Plus, a broth made with such a wide CSA variety of veggie scraps just has to be chock full of vitamins and minerals.  You can also control the amount of sodium in your broth by making it yourself.  I strongly encourage you to try this method.  It is simple and, frankly, much better tasting than commercially made broth.

I initially learned this method from a blog that introduced me to using a crockpot for making veggie broth while I slept at night. http://www.goodforgreen.blogspot.com/2009/03/crockpot-vegetable-stock.html.

After experimentation and reading other blogs and recipes I have come up with the following foolproof method for full flavored broth that can be made in a crockpot or a regular pot:

This will easily become a habit.  Try it!!

Below is a fun way to use carnival (and maybe even large delicata) squash for breakfast.  Toad in the Hole is usually a dish in which an egg is cracked open and cooked inside a piece of toast with a hole cut out of the middle.  Here I am using the hollow center of certain squash to make a quick, one pan toad in the hole that I serve over zesty dressed arugula.  This dish is great for either breakfast or lunch.

Save Print
Squash "Toad in the Hole" over Arugula
Serves: 2-4
Ingredients
Instructions
3.5.3226