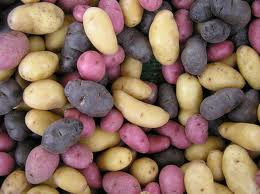 Did you know that potatoes have been around since 5000 BC and that North Americans are one of the largest consumers of potatoes in the world?In fact, Potatoes have been an essential crop for many countries.We can even thank the potato for partly populating the US. In the mid 1800s a huge wave of immigration to the US occurred when Irish potato crops suffered from a fungus that decimated Ireland’s potato supply, threatening the population with starvation.

Potatoes are so central to our way of life today that it seems almost trivial to write about them. I mean we know our potatoes, right?We love them mashed and we love them fried and we are generally comfortable with potatoes in our pantry.So my challenge is to tell you something you might not know about the mighty potato and how to eat it!

Most of us know that there are generally two types of potatoes, each of which partly determines how we cook it. Starchy potatoes, like the infamous russet, become light and fluffy when cooked. Thus it is a great potato for mashing, baking, or frying.Waxy potatoes, like familiar red skinned varieties, hold up their shape and stay firmer during cooking, which makes them good candidates for adding to soups/stews or using in potato salads.However, you may not know that some varieties of potatoes, like Yukon Gold and others, fall somewhere in the middle of the starch continuum and are great cooked in a variety of ways.

We will have the pleasure of trying several varieties of potatoes at Holcomb farm.Some will fall in the middle category of starchiness such as the red gold (red skinned, gold flesh), the Kennebec (white skin white flesh), and the Keuka Gold(similar to the Yukon Gold).Other varieties will tend toward the waxy and include the Carola (brown skin, golden flesh) and The Red Pontiac (red-skinned).

As a nutritional source, potatoes are often underestimated. They are actually low in saturated fat, cholesterol and sodium and are a good source of vitamins C and B6, potassium and manganese, and are even a significant source of fiber.

Potatoes are best when they are free of bruises, sprouts or green spots.Greening in potatoes indicates the presence of a substance called solanine, which can be toxic.Either avoid potatoes with sprouts or greens spots, or be sure to completely cut the green away when using them.

Potatoes are best stored in a dark, dry space like a dry cellar or basement.They don’t do well refrigerated or exposed to warm temperatures.They are also not the best candidates for freezing, as the water in the potato tends to separate from the starch.

Most of us know a myriad of ways to cook a potato.However, below I have included some recipes that I have come across recently that are bit new and different. Happy potato cooking!

Larger numbers of potato chips can be made by placing thinly sliced potatoes in a single layer on baking sheets in a 400-degree oven.But this recipe below is a quick, easy and very fun way to serve a quick snack via the microwave.If you do not have a ribbed microwave plate, place chips on a single layer on a paper-towel lined microwaveable plate.

In a small bowl, toss potato slices, olive oil and adobo.Using your hands, rub oil and seasoning over potato slices to distribute evenly.Place on one layer on a ribbed microwave plate (as in one designed for cooking bacon) sprayed with cooking spray.Cook on high heat for 5-10 minutes, or until slices are about ½ browned.

Cooking time varies with type of microwave, thickness, overall size of potato slice, and area of placement on the plate (generally outside slices tend to cook faster).Watch carefully as you go, cooking in smaller increments of time as slices start to dehydrate and brown.Some slices (like thinner, smaller, or outside pieces) will need to be removed before others to prevent overbrowning.Cool chips completely on a baking rack for a couple of minutes.Chips will crisp up significantly as they cool.

This potato dish is absolutely addictive.Most commercial garam masala spice blends are quite spicy so I have included a quick homemade recipe that won’t burn the tongue.If you prefer more spice, simply add more cayenne or use a commercial blend.The recipe was adapted from CuisineIndia.com.

1. Steam potatoes until just tender throughout (potatoes can be boiled and drained, but they tend to break up more).Place peas in a bowl at room temperature to thaw while you prepare the rest of the dish.

2. In a large skillet, heat peanut oil over medium low heat.Add onion, garlic, ginger and salt, and sauté until onion is soft but not browned, about 8 minutes.Add tomato, turmeric, garam masala, and cashews and cook until tomatoes break down and mixture is thick.Place mixture in a blender with broth and blend until completely smooth.Place back in pan over medium heat.Add potatoes and peas, and cook until vegetables are heated through and sauce is thick, about 5 minutes.Add additional salt and garam masala if desired.

Quick and Not Too Spicy Garam Masala

Mix together.Store in an airtight container in a cool, dry place.

** This recipe was adapted from allrecipes.com

We love this served under grilled or baked fish, especially swordfish.It was adapted from the License to Grill, by Chris Schlesinger and John Willoughby.

– 4-6 medium red skinned or other waxy potatoes, depending upon size

Place potatoes in a large pan and cover with water by two inches.Bring water to a boil and reduce heat to keep to a medium bowl.Bowl for about 10 minutes or until potatoes are tender.Drain potatoes in a colander and allow to sit for 2-3 minutes for steam to evaporate.Place potatoes in the bowl of a food processor.Add lemon juice, and olive oil and blend until smooth (do not over-blend or potatoes will become gluey).Add in parsley and pulse to combine.Adjust salt and olive oil as necessary for taste and consistency.Serve on plates topped with grilled, broiled or baked fish (it is wonderful with grilled swordfish).