Another week goes by and we continue to have gorgeous, non-humid weather. Not sure that is so good for the tomatoes….I know the CSA has had trouble with the tomatoes this season. My own garden tomatoes are suffering as well…so sad. Yet with an occasional good tomato or two and abundant cherry tomatoes, I don’t feel too deprived.

This week I thought I would highlight a couple of my family’s standout CSA meals one again.   Both meals used eggplant, which we are going to be receiving again this week, so I thought I would also highlight eggplant as the week’s featured vegetable (see below).

My family loves Spanish food, probably because we are huge fans of Spanish chorizo and could eat it in absolutely EVERYTHING! Saturday night we had close friends over and made a Spanish feast. It began with Spanish Potato Tortilla as an appetizer that used up some of the CSA potatoes. Next was Paella on the Big Green Egg for the main course, along with Spanish Style Eggplant as a side dish. See below for a few of these great recipes.  If any of you out there have a Big Green Egg and wish to try your hand at Grilled Paella, I followed a great recipe on the Big Green Egg website (click here for recipe)

Another memorable CSA meal this week was Ratatouille Soup with Dairy Free, Gluten Free Corn Muffins. I don’t often make soup in the summer, but the rather cool weather enticed me to make it for lunch one day when I didn’t have any other leftovers around to eat. The ratatouille themed soup makes great work of the CSA eggplant, tomatoes, peppers, summer squash/zucchini, and even cabbage. See below for recipes.

A note on cucumbers—my family is not in love with cucumbers. After a couple of weeks of eating them, the rest of my family typically goes on strike and it is up to me to finish up the bounty. At this point in the season, I like to start putting sliced cucumber in my mint water. I have a huge garden of mint and always have fresh mint steeping in a pitcher of cold water in the fridge. By the middle of the CSA season I typically start adding sliced cucumber to the mix. It makes for a very refreshing, low calorie summer drink.

If you have a recipe to share or have comments regarding some of my recipes, please let us know by commenting on the blog….I would love to hear from more of you! 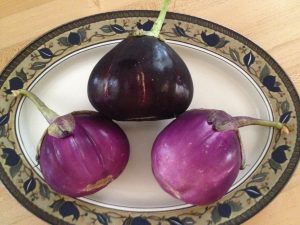 While many varieties and colors of eggplant exist, two general types are most familiar in the US.  They are globe (or bell) and Asian eggplants.  Globe/bell, or Italian-style eggplants, are large, oval or round shaped, and typically a dark shade of purple, whereas Asian eggplants tend to be long and thin, and of a lighter color (with some variations).

While the size and shape of the two types of eggplant lend themselves to slightly different preparation methods, their ultimate taste is barely indistinguishable.  Some argue that Asian eggplants are less bitter; however, bitterness tends to be a function of age and skin.  In general, eggplants that are harvested later or kept too long in storage tend to be more bitter.  Some say that the thicker skins of globe eggplants contribute to their increased bitterness over Asian varieties.  However, if they aren’t too big or over-ripe, globe eggplants can be as sweet and succulent as the Asian types.  Many people opt to peel globe eggplants before cooking to avoid bitterness and a tough exterior, although it is simply a matter of preference.

Eggplant needs to be cooked fully in order to achieve its signature creamy texture and rich flavor.  Undercooked eggplant is rubbery and unappetizing.  Eggplant can be steamed, roasted, baked, sautéed, and grilled.  However, I have found that on the grill or in a sauté pan it can tend to dry out before it gets sufficiently soft.  This is often avoided by a) adding water or another liquid to the pan, b) by lowering the temperature, c) by covering it during and after cooking to allow steam to re-moisturize it, and/or d) by “sweating it”.

This recipe is an adaption of a version given to me by a friend of mine. The method of boiling the eggplant first in salt water guarantees a silky soft texture in the finished dish.

There are many ways of making a Spanish Tortilla. This version is adapted from a Spanish Tapas Boot Camp I attended at the Culinary Institute of America.

While this is a traditional Tapas appetizer, it makes for a great breakfast or lunch entrée. Just cut into triangles instead of small bite sized squares.

1. Heat olive oil in a large skillet (preferably cast iron). Add the potatoes and the onion. Season lightly with salt. Cover pan and cook over medium heat, turning occasionally, until potatoes are tender but not brown. Drain off the oil from the potatoes. Reserve the oil.

2. In a large bowl, lightly beat eggs with 1-teaspoon salt and paprika. Add potato mixture to the bowl with the eggs, submerging the potatoes completely.   Allow to stand for 10 minutes.

3. Wipe out skillet. Heat 2 tablespoons of the reserved oil in the skillet over high heat until hot. Reduce heat to medium and add the potato-egg mixture. Allow mixture to cook, shaking pan occasionally to prevent sticking, until the bottom of the tortilla is lightly browned. Place a large plate over the pan and flip the tortilla upside down on the plate. Add 1 tablespoon of the reserved oil to the pan and swirl to coat all sides. Slide uncooked side of the tortilla back into the pan. Cook until browned. Transfer to a plate and let rest 5 minutes before serving.

4. Cut into rough squares and serve with toothpicks either while still warm or when cooled to room temperature.

This recipe was adapted from theprudentwife.com (click here for original). I reduced the amount of fat and added pureed raw summer squash to the batter, which makes for a lighter yet super moist cornbread.

– 2 tablespoons erythritol or sugar, or a couple of packets of stevia

In a large bowl, whisk cornmeal, coconut flour, baking powder, sea salt and sweetener. Make sure all coconut flour lumps are broken up.

3. Pour wet ingredients over dry ingredients and incorporate by folding with a spatula. Fold in basil. Let mixture sit for 5 minutes. It will thicken up.

4. Divide mixture among 16 muffins. Batter should fill each one at least 3/4’ s full. Bake for 18-20 minutes or until centers bounce back when touched and tester comes out clean. Immediately remove muffins from tin and allow to cool on a rack. Serve warm or at room temperature.

I got this soup idea from a recipe in the August issue of Food Network Magazine. I adapted it a little to add bell peppers and herbs, and to significantly reduce the amount of unnecessary fat.

– 1 1/2 pounds tomatoes, can include cherry tomatoes

Reduce to a simmer, cover, and cook for 10 minutes or until eggplant is soft.   Uncover and add summer squash. Cook, uncovered, stirring occasionally, until squash is tender, about 10 minutes longer. Remove from heat and stir in lemon juice and basil. Serve in soup bowls sprinkled with Parmesan cheese and cabbage (optional).