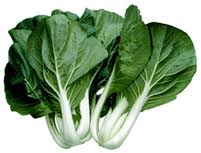 A few years back, I was one of those people that ran from anything that ended in choy. But I could not be a bigger fan of this special vegetable than I am now. Bok Choy is a part of the cabbage family originally cultivated in China. Hence it also known as Chinese cabbage. While there are different varieties of bok choy, you will find the words Pac, Pak, and Choi referring to the same basic vegetable.

Bok Choy generally has whitish green stalks protruding from a base and ending in delicate green leaves, although some varieties have green or even reddish stalks (like the Vivid Choi variety we have this year). The entire plant is edible, which is a good thing, because it is delicious, with a taste halfway between celery and cabbage, but much more delicate than that.

I was surprised to read what a nutritional powerhouse bok choy is compared to many other vegetables. One cup of bok choy affords 100% of the recommended daily allowance of Vitamin A and 75% of Vitamin C. It is also high in some important B vitamins, as well as Vitamin K, folate, calcium, potassium and manganese. It even offers a good amount of Omega 3’s, and has many antioxidant properties. As such, it is considered an anti-inflammatory and anti-cancer food. To top it all off, bok choy is low in calories.

Bok choy can be enjoyed whole, or with leaves/stalks separated. To clean a whole bok choy, rinse under cold water, bending leaves back gently to expose center to water without breaking the stalks from stem (which holds them together). If using bok choy in cut pieces, separate leaves from stem end and rinse well, then cut.

Choose unblemished choy with firm stalks and crisp leaves. Avoid any that are slimy or limp. Bok choy is best stored, unwashed, in the refrigerator for up to 5 days.

As a traditional Asian vegetable, bok choy stars in any stir-fry.  It is also great in stir-fried rice dishes, which offers a more complete meal.

However, there are many more ways than stir-fry to enjoy this special vegetable. Both the stalks and the leaves are great added to salads, as long as the choy is young or otherwise tender. Below I offer a Japanese style quinoa salad bowl recipe that made use of many of the items I received in my share today, including radishes, kohlrabi, scallions, and a mix of Asian greens.

Yet another method of cooking bok choy is braising.  Try braising bok choy whole in your favorite broth, wine, or wine/broth combo. I recently braised whole pac choi in a simmering vegetable broth for 2 minutes, or until the stalks were crisp tender. The result was surprisingly delicious for such minimal preparation. You can also braise bok choy in sake and then reduce the resultant braising liquid to make a sauce. Braised bok choy is great alone or served alongside roasted fish or chicken. You can also steam whole or separated choy like you would any other vegetable, tossing it with your favorite vinaigrette or sauce afterwards.

Another great method for preparing bok choy is roasting or broiling. If the choy is fairly young and small, you can do it whole. For larger choy you might want to consider halving or even quartering it. Brush or drizzle well with your preferred cooking oil and roast/broil just until the stalks are crisp tender (don’t get too close to the heat source as the leaves are quite tender and burn easily).

Recently, I discovered the joy of grilled bok choy. It can be tricky to grill this vegetable, depending upon the idiosyncrasies of your grill. For our gas grill, which tends to run uneven and hot, I do the following: Wash and then pat dry whole young bok choy. Brush the stalks and leaves well with olive oil and sprinkle with salt and pepper. Preheat the grill until hot. Turn down burners to low (or if your grill runs unusually hot, you may want to consider putting the back and front burners on low while the middle burner is turned off). Grill, turning frequently (like every 2 minutes), until the leaves are crisp and browned at the edges (but not black), and stalks are tender (about 10 minutes total).

The grill gives bok choy an unmistakable and irresistible smoked flavor that is great on its own, and is even more awesome with grilled meats. I love finishing grilled choy with a sprinkle of Parmesan, or drizzling it lightly with toasted sesame oil and sprinkling it with sesame seeds (YUM).

This quinoa bowl recipe I share below is a great way to use up not just the kohlrabi, radishes, and bok choy from the share, but also their green tops, which often get discarded or forgotten until too late.

If you don’t have the ingredients for the dressing, use your favorite Asian flavored dressing (see this one). However, I encourage you try this dressing which is light and full of veggie nutrition. 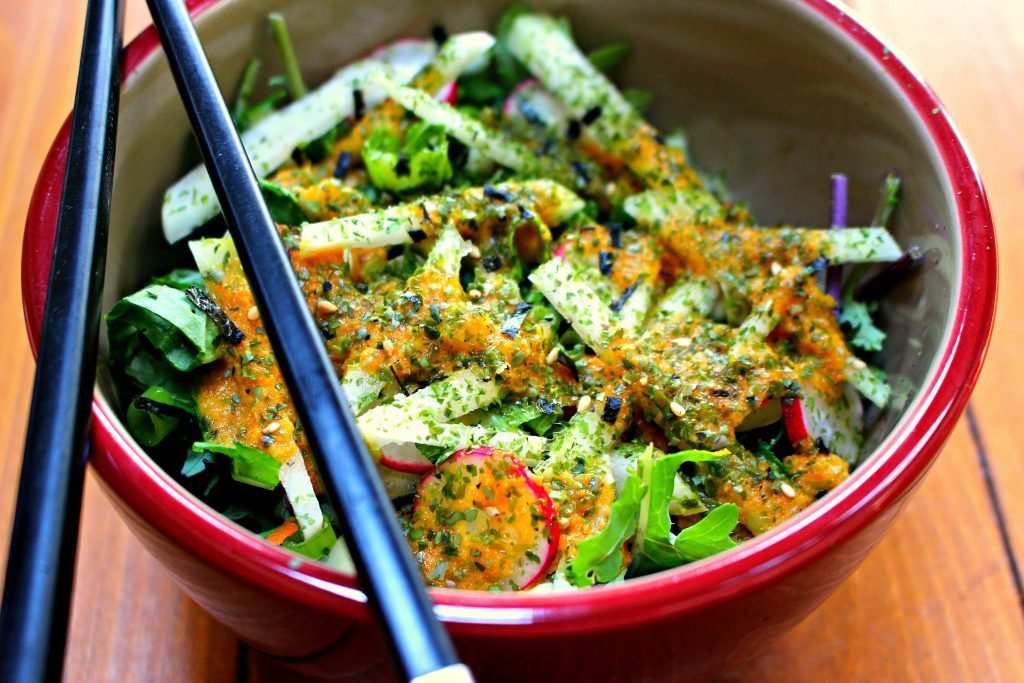