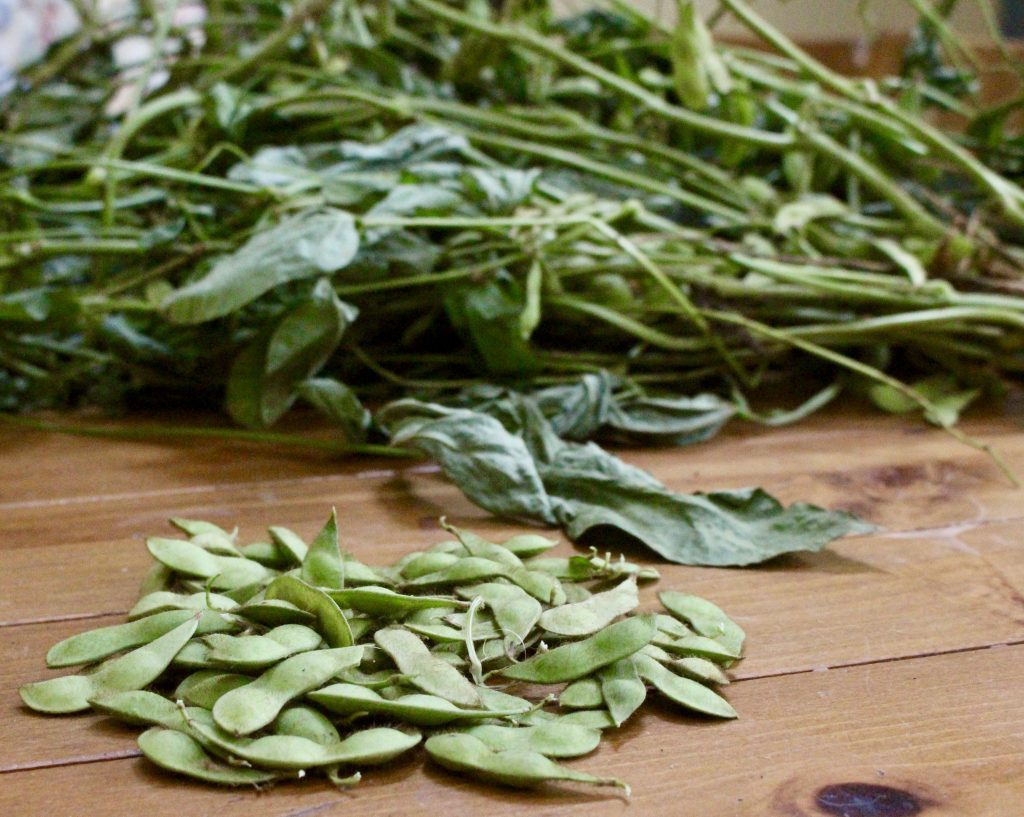 When I was young I lived in Japan and experienced a number of great culinary adventures.  My favorite experience, by far, was tasting edamame, the fresh boiled soybean dish flaked with pure sea salt—divine.  I loved the surprising “pop” of the bean as I squeezed it out of its shell and the wonderful nuttiness of the crisp-tender bean itself.

When we returned to the States we looked everywhere for soybeans but couldn’t find them fresh or frozen, except prepared in certain Japanese restaurants.  It wasn’t until I was in college that I was able to find these gems, and then only in frozen form under the name edamame.  Little did I know that in the interim years, soybeans were becoming a huge cash crop in our country, produced mainly for soy oil and protein meal used as feed or in thousands of processed foods. But how frustrating it was that I couldn’t find the fresh soybeans anywhere, even though millions of acres were being grown in this country every year.  I was thrilled when I joined Holcomb Farm and learned that I could pick my own FRESH soybeans.  What a treat!!

Soybeans are a legume. There are many varieties, affecting aspects such as size, color, and nutritional ratios.  But in general, soybeans are very high in protein (about 35-40%, or about 17 g per cup).  Amazingly, soybeans contain all eight amino acids and thus are a complete protein food.  They also contain significant amounts of fat, carbohydrates, and fiber, as well as various phytochemicals that are thought to treat and/or prevent many chronic diseases.  There is much research on the supposed health benefits of soy; however, there are some who claim these results are overstated. Others even warn of potential harmful effects of lots of soy in the diet, especially for women.  This is due to phytoestrogens in the soybean that can increase estrogen levels, which is a concern for women at risk of estrogen sensitive cancer.  Whether you believe soybeans to be a superfood or not, there is no doubt that they are delicious and an excellent source of nutrition in reasonable amounts.

Soybeans grow in an inedible, tough outer shell that has a soft, yet hairy texture to it.  If you have never tried soybeans, don’t be put off by the shell….you don’t eat it anyway.  The bean is what you are after, and it is worth a little trouble.  Typically the whole beans are quickly boiled/blanched.  The beans then come out with a little squeeze and a very satisfying pop (when they aren’t overcooked, that is).  I think the beans are best when crisp tender, but if you plan to puree or mash them, cook them longer.

Soybeans can be used like peas or beans in many different culinary preparations. They are great just boiled and salted (edamame); or blanched and then shelled.  Shelled beans are wonderful in salads, in soups/stews, mashed or pureed for dips or side-dishes, added to pasta dishes, etc.. Try pureeing them and preparing them as you would hummus, or mashing them like you would potatoes.  Add to Asian stir-fry for interest.  They are a great way to add protein to any vegetarian dish or to increase the protein content of non-vegetarian dishes.

Fresh soybeans have a short picking season, but whole pods or beans can be frozen.  Soybeans should be harvested when pods are plump.Store in airtight containers or plastic wrap in the refrigerator.  Use quickly to maintain nutritional advantages, or freeze for later use.

Place 6 cups water in a large stockpot and add table salt.  Bring to a boil over high heat.  Meanwhile, rinse soybeans well, rubbing with hands under water to remove any loose dirt.  Place soybeans carefully in salted boiling water and boil for 3-5 minutes or until soybeans float to the top, beans are crisp tender and come easily out of the pods with a nice “pop”.  Pour out into a colander and drain.  Sprinkle with sea or kosher salt and serve immediately.

This recipe provides a great way to use leftover edamame and corn on the cob.  It was adapted from a similar recipe on Eatingwell.com.

– 2 cobs of fresh corn, raw or cooked, cut off cobs

– 1 cup shelled edamame (it is easier to shell when cooked)

Heat oil in a heavy non-stick skillet over medium heat.  Add onion and bell peppers and cook, stirring occasionally, until vegetables start to soften, about 5-7 minutes.  Add garlic and thyme and cook, stirring, for one minute.Add broth, corn, and edamame. Cook, stirring occasionally, for 3-5 minutes, or until corn and edamame are crisp tender and liquid has reduced.  Remove from heat and stir in salt, vinegar, fresh basil, and cayenne.Season to taste with fresh pepper.

1. Cook noodles according to package directions and drain.

3. Heat peanut oil in wok or large skillet over medium-high heat.Add meat and cook, stirring occasionally, until no longer red, about 2-3 minutes.  Remove meat with tongs or a slotted spoon to a plate.  Add red pepper and green onions to the pan and cook, stirring frequently, for 2 minutes.  Add edamame and sauce mixture to pan. Cook, stirring frequently, until sauce thickens and edamame is heated through.  Add meat and hot pasta into the pan and toss to coat all ingredients evenly.  Serve immediately.