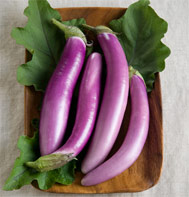 While many varieties and colors of eggplant exist, two general types are most familiar in the US.They are globe and Asian eggplants.Globe, or Italian eggplants, are large, oval-shaped and deep purple; whereas Asian eggplants tend to be long and thin, with a slightly lighter color.At Holcomb, Japanese eggplant, a variety of Asian eggplant, is grown and much beloved.

While the size and shape of the two types of eggplant lend themselves to slightly different preparation methods, their ultimate taste is barely indistinguishable.Some argue that Asian eggplants are less bitter; however, bitterness can also be a function of age and skin.While globe eggplants do tend to have slightly thicker skins, if they aren’t too big or over-ripe, they can be as sweet and succulent as the Asian varieties.Many people opt to peel globe eggplants before cooking to avoid bitterness, although it is simply a matter of preference.

When prepared correctly, eggplant is a divine food, with a silky soft flesh and rich taste.It is prized in Mediterranean and Middle Eastern cooking, where it stars in dishes like Greek Moussaka, Middle Eastern Baba Ganouj, Italian Caponata, and French Ratatouille.It pairs great with many meats and other seasonal vegetables, especially tomatoes and zucchini.

Eggplant needs to be cooked fully in order to achieve its signature creamy texture and rich flavor.Undercooked eggplant is rubbery and unappetizing.Eggplant can be steamed, roasted, baked, sautéed, and grilled.However, I have found that in many preparations, eggplant can tend to dry out before it gets sufficiently soft.This is often avoided by a) adding some liquid to the pan, b) by adding a sufficient amount oil oil, c) by lowering the temperature, d) by covering it during and after cooking to allow steam to re-moisturize it, and/or e) by “sweating it”.

Eggplant’s spongy texture causes it to soak up most of the oil or fat in a dish, which often leads to too much calorie-laden oil being added and absorbed.This is why recipes often direct you to “sweat” the eggplant first by salting it.The salting apparently makes the eggplant less absorbent and spongy.Some say it also removes bitter flavors.Sweating is generally not necessary for smaller, Asian eggplants like Japanese eggplant, but is often recommended for globe eggplant.

To “sweat” eggplant, slice or cut it into desired shapes.Place in a colander and sprinkle with salt.Toss to distribute evenly.Allow to sit for 1 hour.Rinse off salt and then gently squeeze out excess water.Dry with paper towels.Proceed with preferred cooking method.

Choose firm eggplants without marred or bruised skin or soft spots.Stems should be a nice green.Store unwashed eggplants in plastic or a kitchen towel in the vegetable bin of your refrigerator.Make sure the eggplant has plenty of space so that it doesn’t get bruised by other items, which can cause it to spoil and lead to a bitter taste.It should keep at least a week.

Cooked eggplant freezes very well, as do pre or partially cooked eggplant casseroles (like Eggplant Parmesan).According to Janet Chadwick in The Beginner’s Guide to Preserving Food at Home, blanched eggplant can be frozen as well.Add lemon juice to the water (1/4 cup per ½ gallon) to prevent discoloration and blanch for 4 minutes.Drain, pat dry and freeze.

I love to make this quick and tasty side dish with Japanese eggplant.The chile-garlic sauce gives it a great kick, but you can easily leave it out if you don’t prefer spicy flavors.

Heat oil in a 10″ non-stick skillet over medium heat.Add eggplant and sauté, stirring occasionally, until eggplant is tender and soft, about 5-7 minutes.If eggplant gets too dry and begins to stick, add a few tablespoons of water, as needed.Once eggplant is tender, add garlic and sauté an additional minute.Remove from heat and stir in Hoisin and chili-garlic sauce (if using).Serve.

You can also use Hoisin as a brush-on glaze for large slices of eggplant cooked in the oven or on the grill.Add the glaze in the last few minutes of cooking.

Jacob Rivkin, a past Holcomb employee, used to give this great recipe out at the farm.It is incredibly simple, but simply delicious.It is similar to the recipe above, but does not require Hoisin or chile-garlic sauce.

Heat peanut oil in large skillet over medium-low heat.Add onion and saute until tender, about 8 minutes.Add garlic and ginger and saute for 1 minute.Add eggplant and cook for another 2 minutes.Add soy sauce and cook, stirring constantly, until soy sauce is absorbed into the eggplant.Add stock and cover.Cook, stirring occasionally, until eggplant is tender, about 10-15 minutes.If eggplant starts sticking in the pan, add a few tablespoons of water to remoisten.

I am not much for fried foods, but these eggplant fries are absolutely amazing and surprisingly ungreasy.The technique comes from the August 2011 Bon Appetit in which eggplant is first chilled in very cold water, quickly coated in rice flour, and then fried.The hot oil “shocks” the cold eggplant while the water blocks the absorbtion of oil, so the result is ungreasy fries that are really crisp on the outside but meltingly tender in the center.I simplified the recipe and used more pantry-friendly ingredients.

1. Place eggplant slices in large bowl and add 2 cups ice.Cover with cold water and weight down with another bowl or pan to keep eggplant slices submerged.Cover and chill in refrigerator for 2 – 12 hours.

2. In a medium bowl, mix rice flour, garlic powder, and salt until well combined.Set aside.

3. In a large deep pot, add 2″ canola or peanut oil.Attach a deep fry thermometer and heat over medium heat to 325 degrees.

4. Place a rack over a cookie sheet and top with paper towels.Drain a third of the eggplant slices from the water and quickly toss wet slices in rice flour mixture, tossing to coat thoroughly.Gently place in hot oil and fry, turning pieces occasionally, until golden brown, 3-4 minutes.Adjust heat level to keep temperature at 325 degrees.

5. Transfer fried eggplant to paper towel-lined rack and season with salt and grated Parmesan (if desired).Allow oil to heat back up to 325 degrees.Continue as above with remaining eggplant slices (a third at a time).Serve immediately with marinara sauce.

Note:Rice flour can be found in either the flour or “gluten free” sections of most supermarkets, or in health food stores.

This recipe is great to try once the tomatoes come in….

– 2 small or one large fennel bulb, cored if necessary, cut into 3/4″ cubes

2.In a medium bowl, toss onion, fennel, eggplant and unpeeled garlic cloves in 2 tablespoons olive oil.Pour onto one of the prepared baking sheets and spread evenly.Sprinkle with salt and pepper.Cover tightly with foil.

4.Place fennel mixture on bottom rack and tomatoes on top rack.Bake for 20 minutes.Switch racks and remove foil from fennel mixture.Stir both mixtures.Continue to bake an additional 10-20 minutes, stirring both occasionally.Remove fennel and eggplant mixture when vegetables are tender and lightly browned, but before they begin to dry out.Remove tomatoes once water has evaporated.Let cool for 10 minutes.

6.Place cooled fennel and tomato mixtures with garlic in a large bowl.Add 1/2 tablespoon balsamic vinegar and parsley.Stir to combine.Taste.Add salt and pepper and rest of vinegar to taste.

Serve over couscous cooked with broth instead of water.Also good on pasta or served in a pita with crumbled feta cheese.

This recipe is so hearty and rich that no one in the family will miss the meat!

1. Preheat oven to 375.In a medium sized saucepan, heat 2 cups broth until boiling.Reduce heat to a simmer and stir in bulgur. Cover and cook for 12 minutes, or until most of liquid is absorbed and bulgur is tender.Remove from heat and set aside with lid on.

3. Melt butter in a small saucepan over medium-low heat.Add flour to make a roux and cook, stirring frequently for 3 minutes.Add milk all at once and whisk quickly to incorporate milk into roux and avoid lumps.Cook, whisking constantly until mixture is hot and thickens, about 3-5 minutes.Remove from heat and allow to cool for 5 minutes.Add salt to taste.Whisk in egg and nutmeg.Pour bechamel sauce over casserole and spread evenly over top.Sprinkle with Parmesan.

4. Bake moussaka uncovered, for 30-40 minutes or until bubbly and top is light golden brown.Cool for 5 minutes then serve.