I was out picking beans yesterday and came across this highly unusual variety.  They are dark purple, thin, and incredibly long (up to 18″).  As it turns out they are a relative of black eyed peas, but taste more like a green bean.  They can be steamed, sautéed, or used in stir fries.  They can even be grilled if you can figure out a way to keep them from falling through the grates.  See my recipe below for Simply Sautéed Red Noodle Beans. 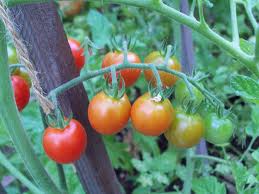 I think of cherry tomatoes as the crown jewels of summer.  They are amazingly colorful and so decadently sweet, juicy, and healthful.  Technically a fruit, tomatoes are one of the most widely grown and consumed product in the US.  Cherry tomatoes are miniature versions of large tomatoes and grow similarly.  They can be as small as a currant or as large as a golf ball and are generally round (typical cherry tomato) or elongated in shape (pear or grape tomatoes).  There are many varieties yielding several bright colors, from white, yellow, orange, bright red, pink, and purple-y black.

In the Pick Your Own section of the farm we have the opportunity to sample several of these wonderful varieties of cherry tomatoes, including:

Matt’s Wild—Don’t be fooled by the size of these beauties–these bright red tomatoes are fully mature, they are just tiny. However, don’t pass them by, they are total flavor bombs, chock full of sugars. They do have a tendency to crack and thus are best picked just before reaching their absolute peak. I do recommend that you don’t mix them in a bag or quart box with other variety of cherry tomatoes or else they will easily burst.

Sun Peach—These tomatoes are slightly elongated, deep pink, sweet, and not as tangy or acidic as their sister variety (Sun Gold).  They are fairly resistant to cracking. It is tempting to think they are not ripe since they don’t get deep red, so remember, pink is ripe!

Pink Cherry—This is another pink variety known for its great balance of sweet and acidic.

Indigo Rose—Just when you thought you knew cherry tomatoes, this variety will throw you for a loop. When exposed to sunlight their skins turn a shiny dark purple but yet they are not yet ripe. It is not until they turn a dull purple brown that they have fully ripened. This is a unique fruit in that it contains anthocyanins in its skin—a potent anti-oxidant. So don’t pass by these healthy gems without trying some—your body will thank you!

Sun Gold—Probably one of the most popular varieties of all time, this tangerine-orange, almost candy sweet tomato with bright acidity ripens early in the season (as we have been blessed to experience).  While known for it sweetness, it does have a tendency to split, especially after rainy weather.  Picking sun golds just before they are fully ripe or in cooler weather can help reduce the amount of splitting in your yield.  These are fantastic snacking tomatoes.

Cherry tomatoes are as equally nutritious as larger tomatoes, containing high amounts of vitamins C, A, and K and containing significant amounts of protein, fiber, Vitamins B6 and E, and important minerals.  They are also high in lycopene, a powerful antioxidant thought to help prevent many major illnesses such as cancer, heart disease, and diabetes.

Cherry tomatoes are divine eaten raw or cooked.  Raw, they are wonderful on tossed or composed green salad, or added to pasta, bean, grain, or corn salads.  Raw cherry tomatoes are also a great base for stuffed hors d’oeuvres (try stuffing them with feta chunks, guacamole, or tapenade).

Cooked, cherry tomatoes really shine in pasta dishes.  They are also great in foil or parchment “hobo packs” with fish or shellfish, were they add tasty moisture without the need for a lot of calorie-laden fat.

Pick plump, un-cracked cherry tomatoes that have uniformly ripened to their appropriate color (pale yellow, dark red, deep pink, dark red, or dark purple).  Store cherry tomatoes in pint boxes or colanders where they are exposed to air (so they don’t begin to spoil).  Do not refrigerate raw cherry tomatoes.  Wash just before eating or cooking.

Here are some of the more interesting (if not crazy) ideas I have come across recently for cherry tomatoes—who knew they could be so versatile:

Even the gluten fiends in my house loved this dish. Pass the tomatoes around the table separately from the chicken because once the buttery tomatoes hit the chicken they start to soften up the crispy breading.

– 2 large chicken breasts, sliced in half lengthwise then pounded thin

When I am overwhelmed with bounty and low on time, I find that simple is the only way. Here are a few simple recipes using fairy tale eggplant, shishito peppers, and red noodle beans.

Preheat a grill (preferably charcoal) and set on medium to medium low heat. In a large bowl, toss eggplant with oil and season well with salt and pepper. Place the eggplant on a grill pan or directly on grill grate. Cover the grill and cook for 2-3 minutes. Turn eggplant and cook another 2-3 minutes. Continue cooking and turning until eggplant is very tender, about 10-15 minutes. Remove from heat. Add additional salt and pepper if desired to taste. Serve immediately.