I am so glad to be back to farm this week after a vacation in Yellowstone National Park.  While the park was absolutely stunning, sadly there weren’t too many fresh veggies to be found there.  I was excited to come back to sweet green peppers, including bell, shishito and padron peppers.  More on that in a bit.

I would like to start my post by announcing that this evening I will be giving a Quick Pickling demonstration at the Granby Public Library from 6:30 – 7:30. This is a free demo, but registration is recommended. For more details click here.

Sweet green peppers tend to get the shaft. They are thought to play second fiddle to their older siblings, the bright red peppers that are the quintessential summer vegetable. But green peppers are a wonderful vegetable in their own right. In fact, green peppers are an essential ingredient in the “Holy Trinity” of vegetables (along with onions and celery) that form the basis for Cajun/Creole dishes. They are crisp and tangy with a just a slight bitter edge that gives them interest and depth. Not surprisingly, they are also quite healthful, being full of vitamins A, C, B6, fiber and many important carotenoids, while carrying a very low calorie and fat load.

There are several varieties of sweet peppers, many of which are green earlier in their maturation. If left to grow for longer periods they will turn red, orange, or yellow. Some varieties stay green throughout the growing process. Green peppers also come in different shapes, the most familiar being the bell shaped sweet green pepper.  But other varieties, like the Cubanelle type, can be long and slender.

We are lucky enough to sample several varieties of sweet peppers at the farm, many of which are shades of green now, but which will start coming in red, orange or yellow as the season progresses. But lest we sit back waiting for the rainbow and miss out on the pot of gold, here are some ideas for using up those sweet green peppers that are available now in the distribution.

Sweet green peppers are great in salads or as a part of vegetable platter. They are also wonderful quick pickled where they keep their fresh, irresistible crunch.

The list here is potentially endless…cooked in omelets or frittatas; roasted or grilled as part of a salad or side dish; roasted and pickled (see recipe below); stuffed and baked; baked in casseroles; cooked in soups/stews; featured in Cajun/Creole cooking; grilled on shish kabobs; or quickly stir-fried with your other favorite veggies or meat.

Choose sweet green peppers that are smooth without wrinkles, bruises, or holes and whose stems appear green and fresh. Store peppers in plastic in the refrigerator, where they should last at least a week.

Shishito and Padron peppers are an interesting variant of sweet green peppers. Peppers and chiles are typically differentiated by their level of heat. Chiles are bred to be spicy, whereas peppers are considered their milder cousins. But what to call the varieties that are sometimes sweet and sometimes hot? Like a game of Russian roulette, some peppers have you guessing until your mouth is on fire and you are reaching for the ice water. Such is the case with both shishito and padron peppers, two different yet similar pepper varieties we are picking now at the farm.

Shishito peppers are popular in Japan, where they are often made into tempura or blistered and sprinkled with sea salt and togarashi (a Japanese condiment sprinkle made from nori seaweed, chilis, and sesame seeds).  They are typically served as an appetizer or snack. Shishitos are light green, thin walled as well as thin in shape, with a slightly wrinkled appearance (see peppers on the right in the photo). Typically harvested when they are young, most shishito peppers will be mild in flavor. It is estimated that that 1 in 10, or even 1 in 20 will be fiery hot, but this ratio narrows the longer the peppers are left on the vine.

Padron peppers are more bell pepper-like in shape, and are also typically harvested young (1 1-1/2” long) when they are mostly mild. Again, 1 in 10 or 1 in 20 are spicy, with the spiciness quotient increasing the longer the fruit is left on the vine. These peppers also have a thin skin, yet are slightly darker green and a bit richer in flavor than Shishitos (these peppers are shown on the left in the photo above). They are often served as tapas in Spain. Both shishito and padron peppers, like your typical bell peppers, will eventually turn red on the vine, but rather than being a sign of sweetness, their color is a bright indicator of their heat level. Perhaps this is when they are best referred to as chiles.

Even though they are awesome blistered on the grill or in a pan, there is no reason these little peppers cannot be used like any other pepper in your culinary adventures. Try putting them on kabobs, adding them to ratatouille when the tomatoes are harvested, using them in chiles or stews, or pickling them.  If you like the simplicity of  blistering them on the grill, under the broiler, or in a saute pan, you can dress them up by tossing the cooked morsels with togarashi, sesame seeds, or flavored salts, tossing them in sauces like miso, adding them to pasta or grains, or stirring chopped bits of them in with burger, meatball or meatloaf mixes.

– sea salt and pepper to taste

Here are few new recipes using other items in the share this week including cherry tomatoes, parsley, basil, cucumbers and baby eggplant.

Tabouli is a very lemony Middle Eastern bulgur salad with tomatoes, cucumbers, and parsley that is traditionally more parsley than bulgur. While I like parsley and lemon, I prefer a more toned-down version. I like to make tabouli with cherry tomatoes because they hold together in the salad better and throw off less water than regular tomatoes. 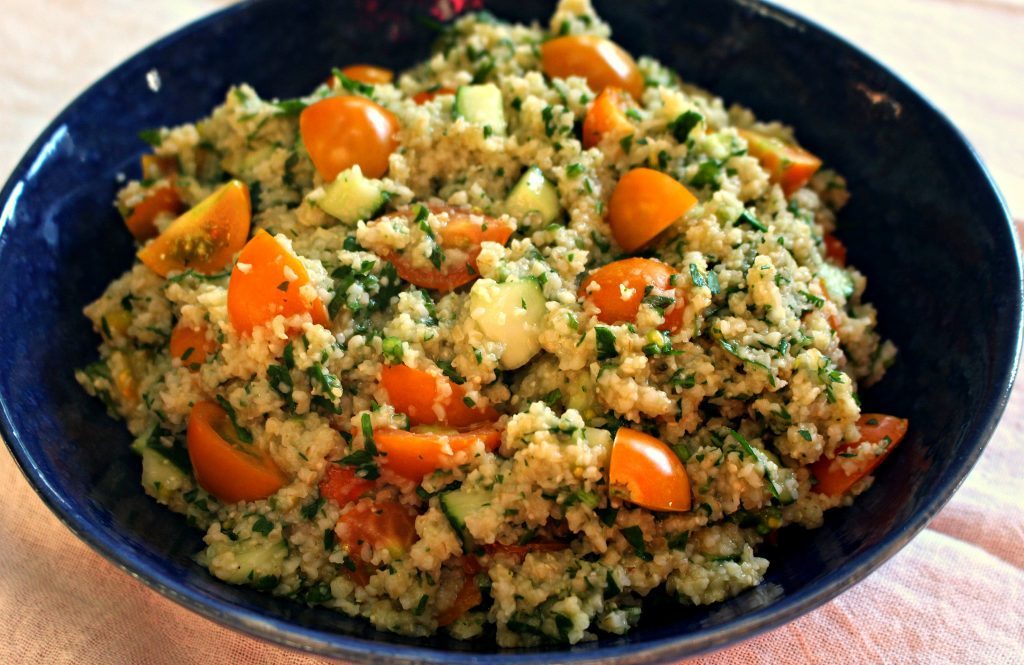 I love finding new ways to serve baby eggplant. This pickled version is a delicious condiment to serve alongside grilled meats on a hot summer day. It is best served at room temperature. The recipe was adapted from Food.com

You can use regular eggplant for this recipe. However, depending upon how bitter the eggplant is, you may want to consider salting and rinsing it first (personally, I have never found it necessary to salt eggplant that comes from Holcomb farm).

Refrigerate for up to 2 weeks.