I love mid summer at the farm.  This week I will focus mainly on one of my all time mid-summer favorites, Eggplant, but will also include recipes for potatoes and Swiss Chard (and even Shishito peppers)

Eggplant offers many healthful nutrients and benefits. Its’ antioxidant properties promote cardiovascular health and may even help prevent cancer. Eggplants are high in fiber, copper and Vitamin B1. They also contain decent amounts of vitamins K and B6, as well as folate, potassium, and manganese. They are naturally low in cholesterol and fat, but do contain significant amounts of sodium, which should be kept in mind when adding additional salt.

Eggplant needs to be cooked fully in order to achieve its signature creamy texture and rich flavor.  Undercooked eggplant is rubbery and unappetizing.  Eggplant can be steamed, roasted, baked, sautéed, and grilled.  However, I have found that on the grill or in a sauté pan it can tend to dry out before it gets sufficiently soft (such a troublemaker!).  This is often avoided by a) adding water or another liquid to the pan, b) by lowering the temperature, c) by covering it during and after cooking to allow steam to re-moisturize it, d)pre-cooking it (usually steaming or boiling) and/or d) by “sweating it”.

One of my favorite ways to use eggplant this time of year is in combination with the other veggies that ripen at the same time, such as tomatoes, peppers, and zucchini.  Below is a master recipe for a very adaptable “goulash” I make often this time of year.  Below that is an example of stepping up the technique to something even more special.

You could easily add a few green peppers to this mix.  Add at the same time as the onion.

In a medium stockpot or dutch oven, heat oil over medium heat. Add onion, garlic and jalapeño and cook, stirring frequently, until onion is soft and translucent, about 7-10 minutes. Add tomatoes and thyme and cook, stirring frequently, for 5 minutes. Add eggplant and salt, stir to mix well and cover. Reduce heat and simmer for 15 minutes, stirring occasionally. Add zucchini and mix well. Cover again and cook for an additional 15 minutes or until vegetables are the desired level of tenderness. Remove from heat. Stir in lemon juice and serve.

I turned this version of my “goulash” into a sumptuous casserole that takes me to the exotic flavors of the Middle East.

I used sweet potato for the topping because the sweetness of the potato perfectly compliments the sweetness from the raisins and the warmth of the cinnamon and cloves.  However, you could sub in the farm white potatoes if you wish. 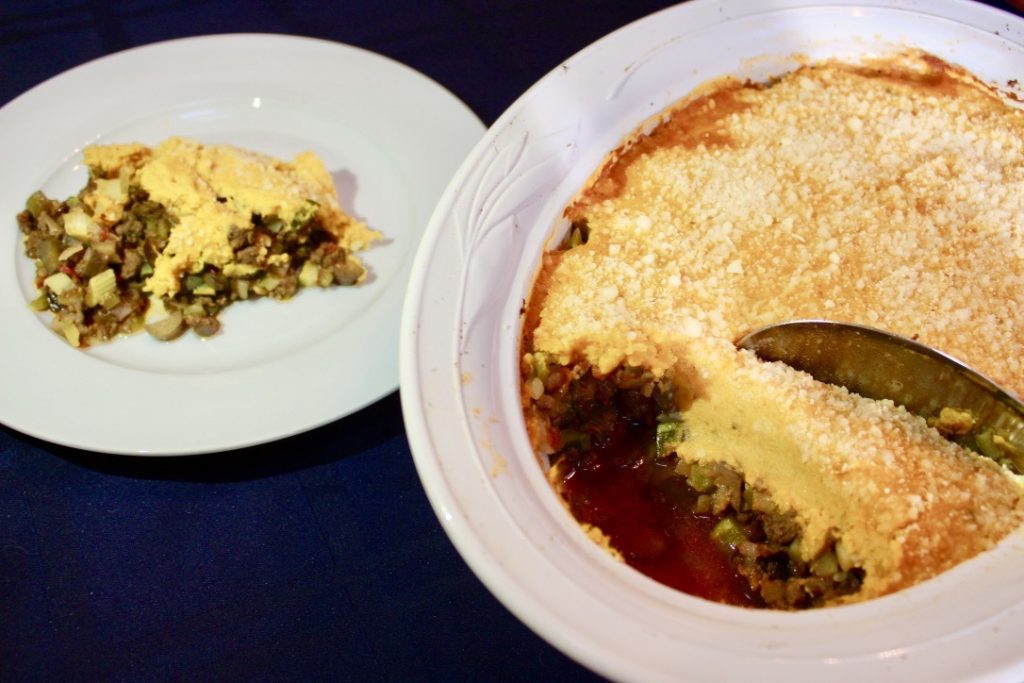 The potatoes are here!! Just in time to tango with the eggplant!

This recipe is an adaptation from a quick recipe blurb by Kay Chung that I saw in Food and Wine magazine a couple of years ago. It combines succulent eggplant with tender potatoes in a warm caramelized salad that is highly addictive. I altered it from my original rendition to bring in shishito peppers and basil since we are receiving them in this weeks share.  Beware; this might become your all-time favorite recipe!

Note that I use a 13-inch non-toxic, non stick pan for this recipe.  If you don’t have a skillet that large you may want to halve the recipe (you want the vegetables to sit in a single layer in the pan so that they get nice and browned).  If you don’t have non-toxic non-stick pans, use a regular pan with at least another tablespoon of oil to prevent sticking.

-5 to 10 Shishito peppers, tops cut off, chopped crosswise into quarters

1. Strip or cut away the leaves from the stem of the chard and keep separate. Cut off 1 1/2” inches of the bottoms of the stems. Then thinly slice the rest of the stems.

2. Heat a skillet (preferably food safe non stick skillet) over medium heat. Add oil and allow oil to get hot. Add garlic and chard stems. Cover skillet and cook, stirring once or twice, for about 6 minutes, or until stems get tender (if they start to stick or brown, add a bit of water). Meanwhile, chop the chard greens into bite-sized pieces. Add greens to the pan, sprinkle with salt and pepper, and stir well. Cover again and cook, stirring a couple of times, for 4-6 minutes or until greens are tender.

These flans are very delicate and as such, don’t turn out well onto a plate.  We ate them from the ramekins with a spoon.

You can use any size ramekin or casserole dish you wish.  Just know that you will have to change the cooking time accordingly. 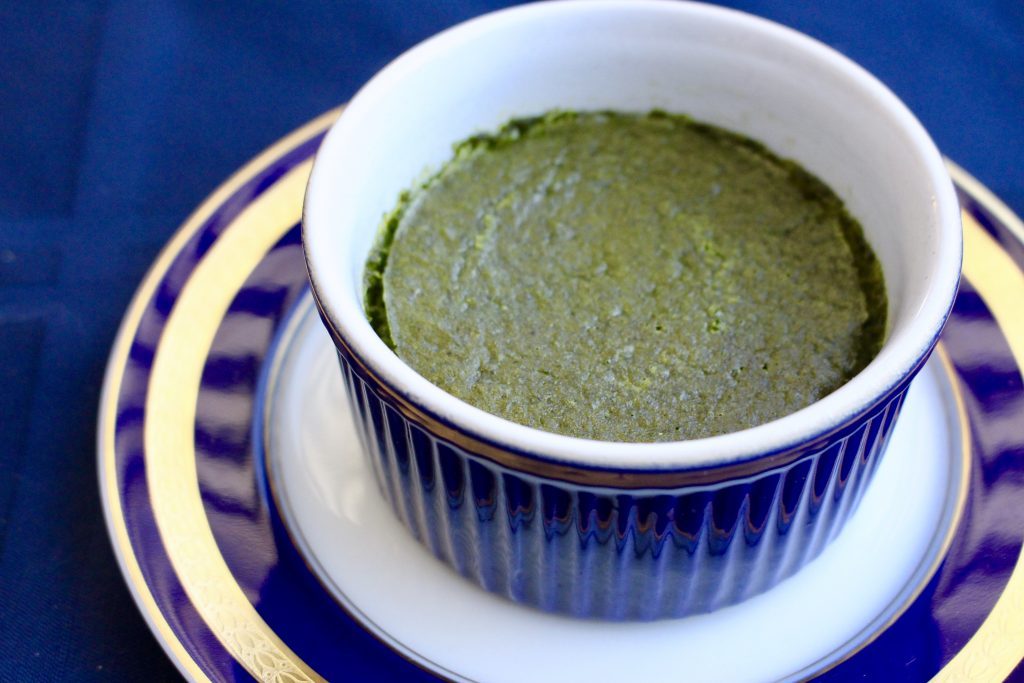 2. Heat butter and oil in a large skillet over medium heat. Add leeks or onion and cook, stirring frequently, until tender, about 8-10 minutes. Add Chard leaves and broth and cover. Cook, stirring occasionally, until chard has wilted. Remove from heat and allow to cool for at least 10 minutes.

3. Place cream, Parmesan, egg, egg yolks, lemon zest and salt in a blender. Add cooled chard mixture. Blend on high speed until completely smooth. Fill each ramekin about 2/3 – 3/4 full. Place in a large baking dish filled with enough water that once ramekins are gently placed in the dish, the water rises to about halfway up the sides of the ramekins. Bake for about 30-35 minutes or until set. Remove from oven. Carefully remove ramekins (tongs help) and place on a cooling rack. Cool for 10 minutes. Serve.