The word from farmer Joe this week is that the distribution is going to be a bit of a mish mash with items likely to be different each distribution day.  So rather than focus on specific vegetables this week, I thought I would focus on a technique–Stuffed Vegetables.

So many of the items we are receiving at the farm throughout the growing season lend themselves to being stuffed–long zucchini, summer squash, round zucchini, large patty pan squash, green and red peppers, eggplant, tomatoes, onions, and all manner of winter squash.

Potential stuffing ingredients are endless and can be meat based or vegetarian.  The most common method for stuffing veggies is to first bake the veggie whole (or halved) until soft. Then about two-thirds of the cooked pulp is removed, leaving at least an 1/8th inch border to maintain structure once stuffed.  The pulp is often chopped up or pureed and added to the stuffing ingredients.

Here are a couple of stuffed items I made this past week.  The first was Mexican stuffed poblano peppers.  Since poblano peppers originate from Mexico, it is natural to pair the stuffing with Mexican ingredients.  I happened to buy some Jalapeño and Chipotle Sausage at the farm stand from Howling Flats farm and thought it would go perfect with the poblanos.  If you can’t find these sausages, substitute a fresh chorizo sausage.

You may not be able to pick enough poblanos to use up all the filling.  Leftover filling is great served in cabbage leaves. 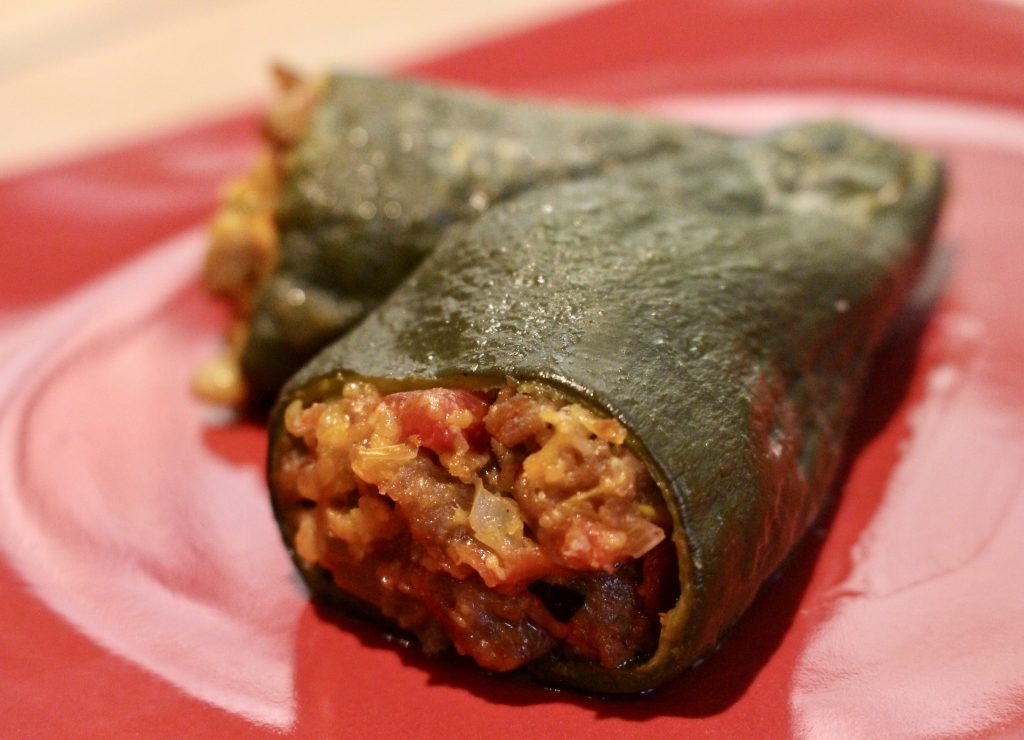 My next stuffing adventure this week was to bake and stuff the adorable round zucchini I picked up last week.  Since I also picked a bunch of the older basil, I had plenty of pesto on hand to flavor the stuffing.

I used both ground turkey and bulgur for this recipe, but you could easily use all bulgur if you are looking for a vegetarian option. 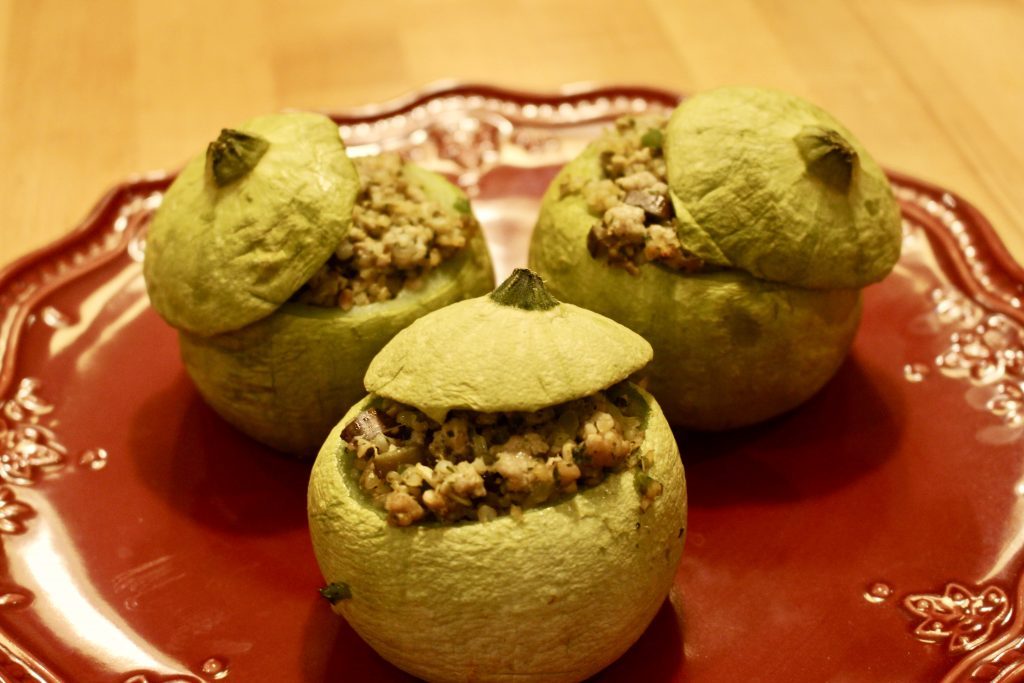 Stuffed Round Squash with Pesto Filling

1. Preheat oven to 400℉. Place an 1/8 inch water in a large baking dish. Place cleaned, whole squash in dish. Cover dish tightly with foil. Bake for 45 minutes to 1 hour, or until knife goes easily through squash. Remove from heat and uncover. Allow to cool.

2. Meanwhile, cook meat with oil over medium-high heat in a large skillet until cooked through. Add onion, pepper and eggplant. Reduce heat to medium. Cook, stirring occasionally, until vegetables are tender, about 10-15 minutes. Remove from heat. Stir in pesto until well incorporated. Taste for salt level and add salt if needed. Allow mixture to cool while squash is baking.

3. Place a triple layer of paper towel over a large plate or platter. Remove squash from oven and uncover. Allow to cool for 15 minutes. Carefully cut about 1/4 inch of top off each squash. Place a strainer over a bowl. Using a spoon, carefully remove pulp from each squash, leaving at least 1/8 inch thick border. Place pulp in strainer, tipping squash upside down over strainer a few times to remove all the water. Once flesh is scooped out, place squash upside down on prepared plate to allow water to drain. Continue with rest of the squash.

4. Drain squash pulp well and chop.  Add pulp to meat filling and stir until well incorporated.  Using a spoon, carefully fill each squash vessel with meat filling, patting it gently to fill to capacity but being careful not to split open the squash. Place prepared squash in well oiled baking dish.

5. Reduce oven temperature to 350℉. Place dish of stuffed squash in oven and bake for 20-30 minutes or until warmed through.

Below is an older, vegetarian recipe for stuffed bell peppers

1. Place broth in a medium saucepan and bring to a boil over medium heat. Reduce heat to low, stir in rinsed quinoa and cover. Cook for 15 minutes. Remove from heat and allow to sit for 10 minutes.

2. Preheat oven to 350. Line a lined baking sheet with foil and spray with cooking spray. Set aside.

Place a steamer insert in a large pot filled with about 1″ water. Bring water to boil. Place pepper halves in steamer insert and steam, covered, until tender, about 8-10 minutes. Remove from steamer and place cut side up on baking sheet while preparing filling. (Peppers can also be boiled, if you don’t have a steamer insert).

3. Heat olive oil in a large skillet over medium-low heat. Add onions, garlic, and jalapeno, and cook, stirring occasionally, until vegetables are tender, about 8 minutes. Add cumin, chile powder, coriander, salt, and pepper, and stir for 1 minute. Add tomatoes and zucchini and cook, stirring occasionally, until tomatoes have broken down and zucchini is tender, about 10-15 minutes. Mixture should not be watery and sauce should have thickened considerably. Add corn and cook for 2-4 minutes, or until corn no longer tastes starchy. Remove from heat and add cooked quinoa and chopped cilantro. Mix well.

4. Fill pepper halves with quinoa mixture. Sprinkle evenly with cheese. Bake for 15 minutes, or until cheese is melted and quinoa mixture is hot.

1. Spray a large baking pan with cooking spray (or brush with oil). Preheat oven to 400℉.

2. Using a spoon, scoop out seeds from zucchini halves, leaving about a 1/4-inch-thick shell. Season with salt and pepper.

3. In a small bowl, mix ricotta, mozzarella, Parmesan, parsley, lemon zest, and lemon juice. Season to taste with salt and pepper. Divide mixture among each zucchini half and spread each portion evenly in down the center hollow. Place tomato halves in a tight single layer across each zucchini half until they are covered completely with tomato.

4. Bake for about 45 minutes or until tomatoes begin to shrink and zucchini is tender. Allow to cool 5-10 minutes before serving.